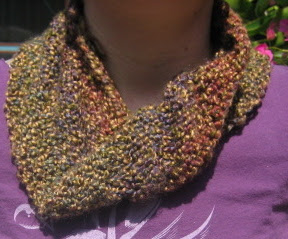 I made up a pattern for some leftover yarn I inherited from Robin. I think it's Homespun, but I'm not sure. I made Dominic a hat and only had enough to make a fairly short cowl. I accidentally twisted it, but it looks ok. I guess I should block it, because it lays strangely. I like the colors a lot, and the sideways ribbing is very subtle. So subtle it doesn't show up in the picture. Great...

On to the more interesting part of the post: North and South. This is the first period drama I've watched that I actually, honestly enjoyed. They do a good job of depicting the tension between traditional middle class / nouveau riche and upper class  / lower class, as well as spatial tension between the North (some place called Millton) and the South (London). The end result is a lot of the closest the British can get to being rude. Additionally, there's a bit of history (but maybe not real history - I didn't look it up) about the rise of unions. Add this to a female lead who doesn't irritate me, and you have a period piece I am really interested in.

Very sparse and quick plot summary: female lead's (Margaret) family moves from London to Millton because the father is annoyed by a new religious edict and leaves the church to become a school master. Female lead goes wandering around getting into trouble because she doesn't understand industrial city life and sees male lead/Byronic hero (John Thornton) while he is screaming at and beating a worker in his factory. He sounds like a jerk, right? Well, worry not. He is upset because the man was smoking a cigarette surrounded by cotton, and John just got back from seeing the wreckage of a fire started in a cotton mill that killed all its workers. After some standard mincing about of feelings on Margaret's part, everyone thinks she reveals her love when she jumps in front of John while his striking workers are threatening the house, because he brought in scabs from Ireland (I really shouldn't like this guy). One worker throw a rock and hits Margaret in the head. (Why, oh why, are brave ladies always getting hit in the head with rocks?) John's mother doesn't like Margaret b/c John does, and she doesn't want to lose him. He finally proposes, and Margaret says no. Through an unlikely series of events, Margaret comes into a bunch of money that is the only thing that can save John from his creditors. Meanwhile, John realizes that on the Night of Scandal when he saw her with some other man at the train station embracing, the man was her brother, and was therefore the Night of Mistaken Identity. He decides he loves her again after pretending not to. They just so happen to meet at a different train station, where she is returning from trying to see him, and he is returning from visiting her childhood home. They don't bother boring you with the inevitable wedding, but they both board the train to go back to Millton together, after he gives her a flower from down south. That doesn't even cover all the subplots and intrigues in the series. I'd highly recommend it.


The story flips a few gender roles, which I appreciate. She gets to save him from money woes and getting hit in the head with a rock, and he is the one walking in the woods feeling sad. People from different social classes get to be friends in the end, and John isn't as much of a rich jerk as he seems at the beginning. Honestly though, my favorite part was our Byronic hero, John Thornton. Mostly because I love Byronic heroes. I'm not saying I would date one, or that I bewail my long-term relationship with a personable, funny and emotionally-accessible man -- all I'm saying is that even the most predictable movie or series is better with a Byronic hero.

Usually Michael's has a somewhat decent selection of yarn, but I never expected the brilliant, radioactive fuchsia wool from Stitch Nation. There were three other colors: impossible red, jet black, and aquamarine--and I had to stand there just staring at them like a zombie (or perhaps a female bird of paradise?) for a few minutes. "What the hell?" I thought. Then, "Ok, I better get all of it." Like, ALL of it. But, since I am an adult and have a little bit more impulse control than when I was a child (though, apparently, I can still be mesmerized for hours by pretty colors), I got only four of the fuchsia.

Sometimes the universe just drops a gem like this in my lap, and lately, I've been trying to regain my sense of sheer wonder at the world in order to appreciate these little gifts. A few weeks later, the universe (well, Netflix, actually) dropped me another gem when I watched the four part series Any Human Heart. I'm usually not looking for anything too spectacular (much like my browsing in the yarn section) when it comes to British period dramas--some British accents, funny costumes, acting ranging from embarrassingly bad to middling (it's like pizza--even when it's bad, it's good)--so Any Human Heart was FUCHSIA. Am I getting too heavy handed with the symbolism here? Who cares. The point is, I had to stop staring at the fantastically bright ribbed (which is the closest I will get to following a pattern) scarf in my lap in order to stare at the stunningly good film playing on my computer. 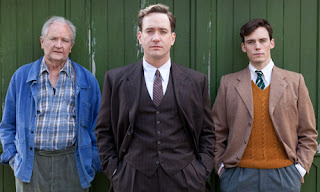 Simply put, it's the  life story of a writer named Logan Mountstuart beginning when he's about 20 years old sometime in the mid-1920s to when he dies in the 1990s (that was NOT a spoiler--everybody dies, dude). Maybe this film won't get you the way it got me, but let's just say this bird had all the right feathers to tickle me with, including (but not limited to): maddeningly attractive actor playing young Logan, fictional friendships with historical figures--reports on the Spanish Civil War with Hemingway, recruited into British naval intelligence by Ian Flemming, etc.--Matthew MacFayden (who played Mr. Darcy in Joe Wright's version of Pride and Prejudice) as mid-life Logan, as well as subtle jokes and oddities carefully tucked into little corners of the story and, of course, a good dose of hopelessly romantic love stories.

My favorite secret elbow-nudge in the film is when Logan asks the female radical activist he's working with in the '70s why the three members of the affinity group are called by their last names. "John says it's supposed to keep us militant," she explains. Logan then asks if John (the man and leader of the group) is John's last name. "Well, no," she says, "We call him John because his last name is Vivian." Bam! If you're not looking closely you might miss the subtle jab at manarchist activists (manarchivists?)--and, wait a second, aren't I watching a period drama that's about some privileged white dude's life? 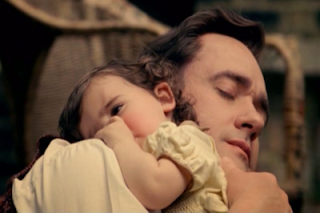 These small, surprising moments are clever and titillating, but the cleverness of the movie is a cover for the more profound stories: the love, happiness, anguish, and sorrow we're witness to. I guess what I'm saying is that the really good, really fascinating thing about this film is the way Logan's emotional experience is portrayed. The director communicates Logan's happiness, for example, with sparkly, hazy, slow motion shots of Logan looking at sunlight filtering through leaves in his garden. There are countless flash-forwards and flash-backs, and they're not always used as  explanation but more as evocation of the experience of memory, nostalgia, clairvoyance--things our minds do while our senses continue to perceive the world unfolding around us. We're watching this human move through life, and the film itself also seems something alive, something that breathes and ponders and revels. It's a good story, and it's well told.

Phew! Apparently there are profound thoughts to be had while knitting and watching TV.

Downtown Abbey + All Wrapped Up

I've been meaning to post about Downtown Abbey for month now, but hadn't gotten around to taking pictures of the wrap  I finished while watching it. Now I've mostly forgotten all my impressions. Whoops!

A few things I can remember: red headed girl was cuter and nicer than Mary, and I'm sad she died; Mr. Bates and Anna are naturally adorable; Sybil's political adventures fall under the "brave girl gets head trauma" trope, which is really annoying; and the dad is pretty annoying. I watched the entire 2 seasons/series over Mardi Gras instead of going to parades. It was awesome. I honestly will probably have completely forgotten about it by the time it starts airing, but it was fun.

I modified the All Wrapped Up pattern from Scarab Knits. I like the simplicity of the large stripes, but i'm still working out how to wear it. I used Loops and Threads Impeccable (which the rest is being used for  the limelight socks). It was a fairly quick knit, but my yarn choice means it is pretty heavy. Definitely not a summer wrap.Don't worry, I won't wear it over purple, and the red is not as bright as it appears in the pictures. 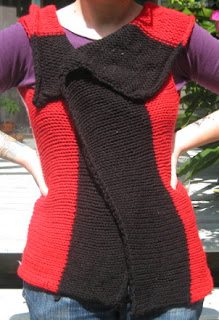 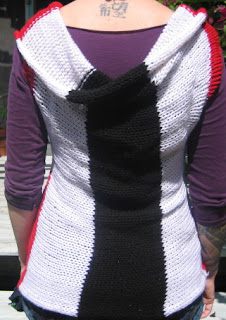 OK, fine! You win, George Eliot! The ending of Daniel Deronda was much better than I expected. Most of the "twists" were really obvious, like of course he was going to be Jewish and his mother rich, but the unexpected parts were great. His mom gave him up because she wanted to be a famous singer instead of a wife and mother. Gwendolyn allows her shitty, abusive husband to drown. Daniel decides to quit being an English gentleman-in-training and go to the Middle East to fight for  Jewish homeland, and marries Mirah instead of Gwendolyn. All those things are way more radical than I expected, but I think I did George Eliot a disservice by assuming her to be as predictable as Jane Austen.

I finished up one of a pair of Limelight Stirrup Socks while watching this episode. I'm using some stash yarn, but I think it's Loops and Threads Impeccable. I still need to weave in a million ends and crochet around the heel opening, but otherwise it is done. I haven't done any color work before, so I'm really glad at how it turned out. My camera sucks so all the images look terrible. Sorry. 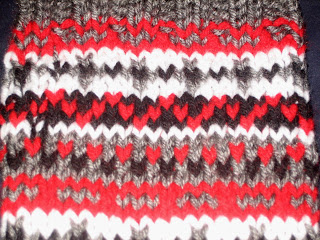 Hello! For this installment of Period Dramas + Knitting, I watched the first three episodes of the BBC's  Daniel Deronda. It's a four part series, but I haven't brought myself to watch the last one. It's not quite as good as I had hoped. I don't  find the characters particularly interesting. Also, I have a confession to make. I have never read any George Eliot and if I can help it, I never will. I don't know if that makes me a terrible future-English Ph.d, but there you have it. Only last year did I finally read a Jane Austen novel and enjoy it. BUT I do really like watching television shows set in these time periods or based on novels I would never read. I should probably be ashamed to admit that. I do find the ethnic and religious tension between the "proper Englishmen" and the Jewish Londoners to be very interesting, but the love story is just not interesting. 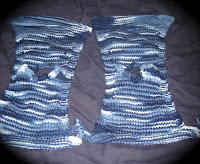 During these episodes I finished up the second hen sweater I'm making for Farm Sanctuary. They just rescued a bunch of hens from factory farming, and I just inherited a bunch of stash yarn, so I made a couple. I'm going to try to make a lot of them, but they aren't the most interesting things in the world to knit. 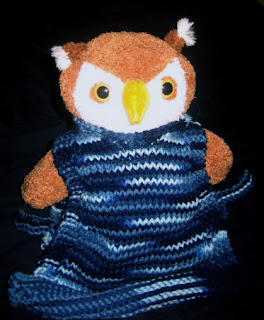 Here is my lovely model Owlvis Costello giving you a general idea how these sweaters work, except he's a little short for them.
Posted by Jessica at 6:24 PM No comments: